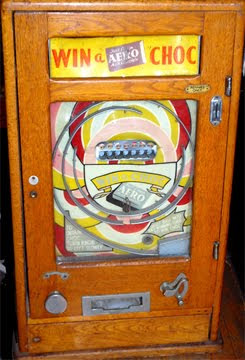 New to the confectionery collection is this penny slot, pinball (palachinka?), chocolate vending machine. A specially placed ball would win you a Aero Bar. Now owned by Nestle, the Aero was launched in October 1935, as 'the new chocolate' by a chocolate company called Rowntree. It cost few shillings, pennies or as advertised on the wrapper, 2d. The symbol for the £ penny was "d", from the French denier.

Initially, the candy bar was tested in the North of England but distribution expanded throughout the UK the following year. A huge hit, the 'new chocolate' bar, with it's aerated or bubble center, was soon introduced to U.S. markets.

By 1936, the Aero was sold internationally and it took New York by sweet surprise. It was filled with air -- not puffed rice-- as it went head-to-head with the popular, Nestle Crunch bar. With it's beautiful graphics, this wooden vending machine is likely from the early Aero launch era.

The machine came to us at a great moment. We are gathering some collection pieces as the It's A CANDY NATION exhibit heads to Canada. I just bought this 1960 Rowntree's Aero ad!

Today the Aero is harder to find in New York but available at Britty places like Tea & Sympathy. Nestle's Aero is now primarily sold in the UK and Canada. Thanks, Polly!

June 16th Postscript: Thanks for your inquiries (and enquiries) but the vintage machine is not for sale! 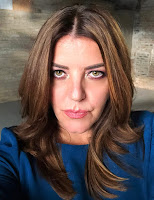 The Food That Built America