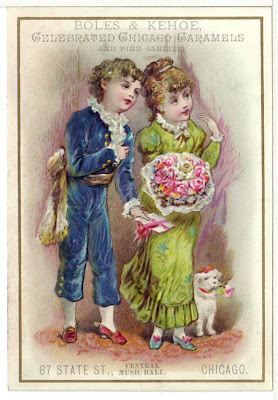 Chicagoans are proud of the city’s status as the City of Big Shoulders.

But the city also has a sweet heart.

Fannie May chocolates, a familiar sight to most Chicagoans. An upcoming lecture series at the Chicago History Museum will look at Chicago's role in candy history.

Chicago is the birthplace of Fannie May, Jelly Belly (a.k.a. Goelitz) and the sweet-smelling Blommer’s Chocolate Factory.

In 1893, William Wrigley Jr. rolled out Juicy Fruit and Wrigley’s Spearmint Chewing Gum. Some cities name their majestic baseball stadiums after beer barons. Chicago’s most famous ballpark is named after a gummy confectioner.

In 1965, the Beatles stopped in for some Atomic Busters at Margie’s Candies, 1960 N. Western. Money can’t buy you love, but it can buy you candy at Margie’s (at the same location since 1921).

Much of this history will be covered in depth at Sweet Home Chicago, a month-long series beginning Feb. 4 at the Chicago History Museum.

At 1 p.m. on Feb. 6, Kimmerle will lead a Willy Wonka-ized bus tour of Chicago’s sweetest spots, with stops at Fannie May, Blommer, a VIP tour of the Wrigley Building and Vosges Haut-Chocolat, 951 W. Armitage. Tastings will be served at each spot.

Chicago was the perfect storm for sweets.

“The Chicago Fire [of 1871] gave the city an opportunity to reinvent itself,” says Kimmerle, who was a marketing rep for Fannie May in the mid-1990s. “The rail lines and waterways made Chicago an ideal location. And immigrants were from so many different places. They all had fantastic recipes to make unique things, unlike Milwaukee, which would be predominantly German. Chicago was home for Italians, Greeks, you name it.

“At the [1893 World’s] Columbian Expo, equipment companies from Germany manufactured chocolate. It was the first time anybody in America had seen the stuff. Milton Hershey walked by and said, ‘Forget caramels. I’m going to be making chocolate.’ ”

Juicy Fruit and the hamburger also made their American debut at the exposition. “By the late 1800s, a national confectioners organization started calling Chicago ‘America’s Sweetest Spot,’ ” she says.

Kimmerle is conscientious about her confectionary pursuits. She is director of the American Museum of Candy being planned for a 2011 opening in Somerset, N.J.

“I have one of the biggest collections of confectionary-related historical material,” she says. “That’s several thousand pieces ranging from advertising to old packaging and boxes and trade cards. I’ll have a show-and-tell table at the lectures where people can put on white gloves and hold candy bar wrappers from the 1920s.”

Kimmerle fell in love with the candy business while working at Fannie May.

“The factory was next to the offices,” she recalls. “I could see Joe Labello making our candy in the hard-candy room the way he had done 50 years earlier.

“I got fascinated with the recipes and historical aspects. And because I was a buyer, I got to go into other candy factories as well. That’s what led to my first book [Candy: The Sweet History].”

Kimmerle has just finished her latest book, Blommer: An American Chocolate Legacy, about the largest cocoa processor in North America. The book will be out in the spring and will be available at the Blommer gift shop, 600 W. Kinzie.

“There’s a reason Warren Buffett owns See’s [Candies],” Kimmerle says. “That’s why Kraft put billions on the line for Cadbury. And, as a consultant, I definitely got busier during the recession. People can’t take the large vacation, but they can afford to spend a little on candy.”

What is Kimmerle’s favorite candy?

“That’s an interesting question,” she says. “Does it have to be from Chicago?”

“So you’re a salty-sweet guy,” she says. “Right now, I’m eating a lot of dark chocolate. Let’s leave it at that.”